California Today: An Outpouring of Support in Oakland 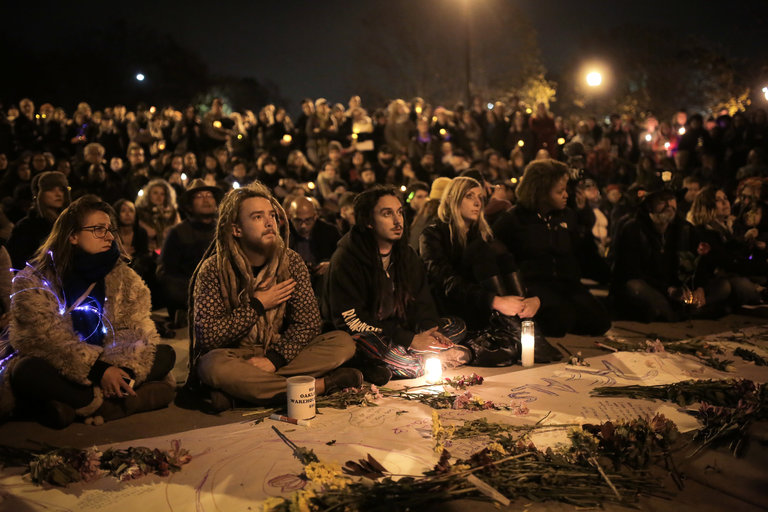 People gathered at a vigil in Oakland on Monday for the victims of the warehouse fire. Photo: Elijah Nouvelage/Getty Images

For Americans horrified by the fatal fire in Oakland, many did the only thing they could: open their wallets.

Hundreds of thousands of dollars have poured into two principal fund-raising campaigns since the warehouse fire in the city’s Fruitvale neighborhood on Friday left at least 36 people dead.

“We are overwhelmed with the amount of support,” said Josette Melchor, founder of Gray Area Foundation for the Arts in San Francisco, which set up a fund-raising drive on Youcaring.com on Saturday.

She said an influx of money had come from technology companies, law firms and other cities.

By early Tuesday, the total had surpassed $360,000 and was growing fast.

Another drive started by the Oakland Athletics on the same website had garnered about $300,000, helped by hefty donations from the A’s, the Raiders and the Warriors. Each sports team gave $50,000, added to $75,000 from Sutter Health.

In both campaigns, smaller giving of $20 or $50 flowed in from hundreds of individuals, many posting notes along the same theme: “So sorry.”

Tomiquia Moss, chief of staff for Mayor Libby Schaaf of Oakland, said on Monday that the city was in official talks with the Gray Area Foundation, the A’s and the Red Cross about coordinating the relief.

Precisely how it would be spent has yet to be determined, she said.

But, she added, none of the money would cover overhead or causes unrelated to the loss off life at the artists’ colony, known as the Ghost Ship.

“All of these funds will be used specifically for the purposes of supporting to victims of this fire,” she said.

As more people are moved to help this week, experts on Monday warned about potential fraudulent schemes.

If you think it’s unfathomable that anyone would do such a thing, think again, said Andi McNeal, the director of research at the Association of Certified Fraud Examiners.

“Absolutely they do after every major disaster,” she said. “It’s heartbreaking.”

Her advice? If you’re not certain, stick with established charities.