The Guerrilla Movement To Deploy Sensors All Over Your City “You want to see our sensor?” Pierre Forcioli-Conti gestures at a high window that leads to the roof. “You’ll have to climb over Matt’s desk and go out the window.” No problem. I wriggle through the window and climb out on top of the the refurbished 1940s movie theater on Mission Street in San Francisco. It doubles as his office.

Image from It Feels Like, part of the Sense Your City project

Pierre joins me next to the theater’s still-intact marquee, once topped by a neon-lit sign that used to read GRAND. We duck under the struts holding up the marquee, then crunch over tar paper and decades of bird droppings to reach a balustrade ringing the roof. We’re clinging to the outside of the new digs of Gray Area, an art and technology nonprofit. One of the many projects they’re supporting involves putting sensors on city buildings. Pierre, director of programs and initiatives at Gray Area, reaches over the edge of the roof and retrieves a white plastic case about the size of a pencil box. He cracks it open for me, revealing a microcontroller and a few sensors inside for tracking pollution, dust, light, sound, temperature, and humidity. The device was made by Taurin Barrera in collaboration with Seeed Studio for a guerrilla data-gathering project called Sense Your City. It’s the most recent project of Data Canvas, a global initiative founded by Gray Area, swissnex San Francisco, and Lift in 2013 that focuses on cities and data. Volunteers have assembled and installed 100 of the sensor kits, putting them on the outsides of buildings throughout San Francisco — and in seven other cities around the world, including Bangalore, Singapore, and Geneva. Sensors like these are already used by cities and law enforcement agencies across the world to do things like track air quality and traffic, and prevent crime. But why would artists want this kind of data?

Pierre, who began his career as a filmmaker, describes the sensors the way a director might describe cameras. They “allow you to see things from a different angle.” He says they’re for helping people to tell stories. And of course these sensors pick up bits of information that cameras and microphones never could: they smell the air, they taste moisture, and they feel the sting of pollution. Though a camera can give you a general sense of how a place looks, these sensors can tell you very precisely about all the complex networks — from weather to social groups — that make a place what it is.

The problem is that when you gather huge quantities of data, it’s very difficult to turn it into a story as riveting as a movie can be. It seems impossible for numbers in a database to describe a place like the busy city block below us on Mission Street, packed with bins of fruit, carts topped with roasting hot dogs wrapped in bacon, families on shopping trips, and phone-swiping hipsters lining up for coffee next door. That’s why the whole point of the Sense Your City project is to make all the data open to the public, so that information artists can turn it into visions we can interpret for ourselves.

“The more that cities have become these complex networks, the more it makes sense that data is for storytelling the same way that images and sound were in the past.” Pierre may be describing the way data visualizations could replace filmmaking, but he’s not naive about it. He’s careful to say that data is about interpretation. No matter how precise or factual the readings coming off this sensor may be, they can still be represented in a misleading way. “That’s why people need to understand this data and manipulate it for themselves,” Pierre concludes.

The group just posted the winners from their first data visualization contest, using information gathered during December 2014 and January 2015. There were a wide range of entries that used different parts of the data to show relationships between the cities, as well as drilling down on each city alone. Some are artistic — a project called Sonic Particles assigns different musical tones to different pieces of data, turning the whole dataset into haunting electronic music. Others are more practical, such as a project called Seeing the Air, which offers intriguing visualizations of air quality in all the cities. In this video, below, of a visualization created by Jonas Lauener and Matthias Berger from the Future Cities Lab in Singapore, you can also see how these sensors might help scientists understand how temperature and humidity in cities create clouds. Lauener and Berger streamed data from their sensor to a video file of a weather timelapse video in Singapore. The result was a visual record of the clouds (in the photos) and the exact temperature and humidity (from the sensor).

And there are data visualizations that are deceptively silly, like this one by Michael Flückigerwhich converts air quality — measured in pollution and dust levels — into emoji. So all 7 cities get a daily emoji rating, which sounds cute until you realize that what you’re looking at is whether people can breathe in these environments. 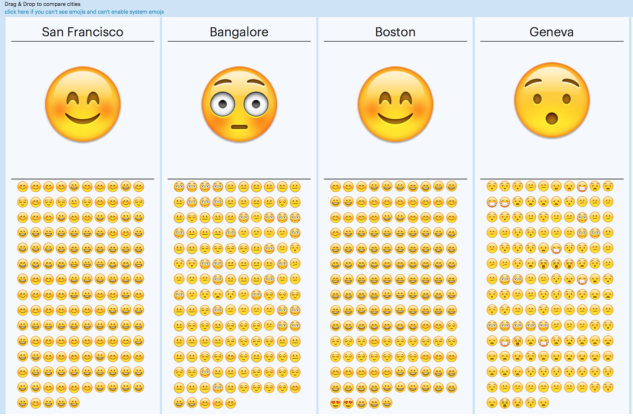 But Sense Your City isn’t just about making clever data visualizations. Pierre hopes it will help people understand their cities better, especially in an era when so much data is being gathered about them by government and private entities who aren’t sharing it. The participants in Sense Your City are trying to “break down the monopoly of surveillance,” he says, by generating their own data that’s free and open to the public. “It’s like producing your own media to tell stories different from mainstream media.” Still, he admits, just because data is public doesn’t mean everyone has access to it. There’s a simple reason for that — “it’s hard to read and it’s boring.”

But over time, Pierre and other participants in Sense Your City are striving to create a wellspring of city data that creators can turn into stories that are interesting and easy to grasp. “Once we have a production pipeline going on, with people using [the data] to tell stories, you can go to a map of San Francisco you can see political interpretations of city. Suddenly you have public data that is accessible to way more people.” He shrugs and grins infectiously. “We are not there yet but that’s the part we’re working on.”

If you’d like to be part of Data Canvas’ ongoing experiments, they will be deploying more sensors and making all data available for future contests and projects. Join up, and discover all the stories in your city’s millions of data points.