Join us in honoring the life and work of Gene Youngblood, a true visionary whose work will continue to inspire generations to come. On Earth Day on April 22nd, we celebrate the media theorist by re-presenting his Closing Keynote from the Gray Area Festival in 2016.

The Build: The Challenge To Create On the Same Scale As We Can Destroy
Summon the breathtaking image of the multitude pouring into streets and plazas around the world in millions to demonstrate against tyranny. Now imagine instead they’re demanding a free and open internet. The likelihood of that is almost zero, we would agree. But why is that? What would have to happen to make that utopian spectacle reality? What insurgent algorithm would get us from here to there?

Gene Youngblood is an internationally known theorist of media arts and politics. His book Expanded Cinema (1970), the first to consider video as an art form, was seminal in establishing Media Art as a recognized scholarly and artistic discipline. He is also widely known as a pioneering voice in the media democracy movement, and has been teaching, writing and lecturing on the subject since 1970. Michael Parenti has called Youngblood “a leading critic of media culture.” BBC investigative reporter Greg Palast thinks he’s “a true revolutionary.” Alternative Radio founder David Barsamian notes Youngblood’s “deep and early insight into how culture is manufactured.” Film director Monte Hellman (Two Lane Blacktop) calls him “one of our great natural resources.” Actor-activist Peter Coyote says Youngblood “illuminates dark corners … reminding us that ethics and morality are essential parts of the agreement we call reality.” Paul Krassner, publisher of The Realist, says Youngblood’s writings on counterculture “capture the spirit of a time when there was an evolutionary jump in consciousness, inspiring a sense of hope that it’s happening again now.”

In 2020, our inaugural program on our online initiative presented Gray Area Reads Expanded Cinema, celebrating the 50th anniversary re-release of a book enormously influential to our thinking around immersive art. Each week, we brought Gene Youngblood in conversation with leading thinkers and creators in the field to reflect on how the influential text continues to serve as a critical field guide to navigating the sociocultural and sociopolitical realities of our present world.

A unique eyewitness account of burgeoning experimental film and the birth of video art in the late 1960s, this far- ranging study traces the evolution of cinematic language to the end of fiction, drama, and realism. Vast in scope, its prescient formulations include "the paleocybernetic age," "intermedia," the "artist as design scientist," the "artist as ecologist," "synaesthetics and kinesthetics," and "the technosphere: man/machine symbiosis." Outstanding works are analyzed in detail.

Providing an unparalleled historical documentation, Expanded Cinema clarifies a chapter of countercultural history that is still not fully represented in the art historical record half a century later. The book will also inspire the current generation of artists working in ever-newer expansions of the cinematic environment and will prove invaluable to all who are concerned with the technologies that are reshaping the nature of human communication. 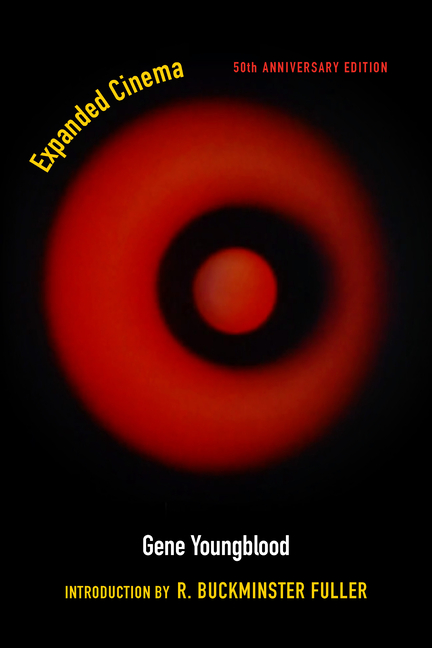